Since being sworn in on June 28, 2018, Superintendent Cynthia Saunders has led the School District of Manatee County with foresight, energy and imagination. Drawing on 30 years of service in education in Florida, Ms. Saunders has guided the district to impressive improvements academically, financially and in introducing innovative new programs and initiatives.

When Ms. Saunders arrived in Manatee County as Executive Director of Secondary Schools in 2013, the District had 18 “D” or “F” schools. By the end of her first year as superintendent, the District had eliminated all “F” schools and reduced the number of “D” schools to two. The Manatee District had also received a “C” grade from the Florida Department of Education four-out-of five years from 2012-2016. Since 2016, the Manatee District has received three consecutive “B” grades and finished just shy of an “A” following her first year as superintendent.

Financially, the district raised its positive fund balance from $30.2 million when Ms. Saunders took office to more than $34.7 million by the end of her first year. She also worked with the School Board to increase pay for all employees, especially teacher pay. Pay for starting teachers in Manatee County now ranks among the highest in the state. And, the school district successfully completed and opened three new schools in August 2019 – Barbara A. Harvey Elementary in Parrish, Dr. Mona Jain Middle in Lakewood Ranch and Parrish Community High.

Perhaps Ms. Saunders’ most monumental impact has been in introducing exciting new learning opportunities to the approximately 50,000 students in the Manatee District.

Since February 2020, Ms. Saunders has been leading the district through the difficult challenges related to COVID-19. In March, she guided the Manatee District through one of the fastest and most efficient moves to full-time eLearning in Florida by using innovative strategies to distribute more than 11,000 computer devices and deliver more than 860,00 meals to students during April-May 2020.

Ms. Saunders holds a Master’s Degree (M.S.) from Nova Southeastern University in Educational Leadership, and a Bachelor’s degree (B.S.) in Mathematics Education at the University of Central Florida.

Mrs. Saunders is married to George “Rock” Saunders. They have one son, Casey, and are proud grandparents. 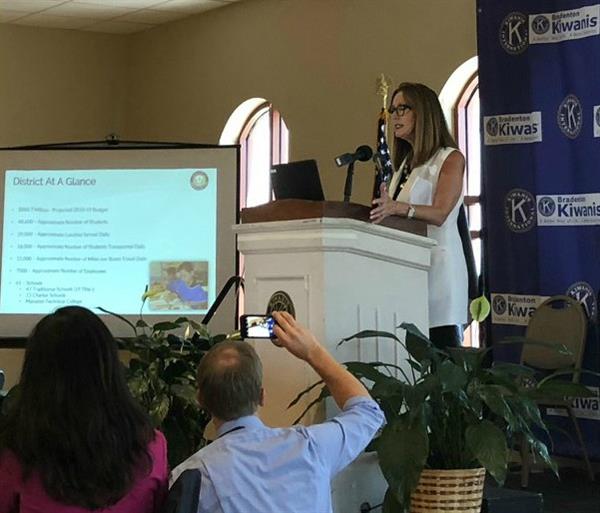